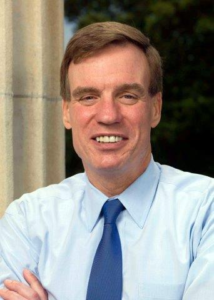 Join us for a special event on March 8th from 10:30am-12:00pm hosted at Eastern Foundry, featuring Senator Mark Warner.

Senator Warner was elected to the U.S. Senate in November 2008 and reelected to a second term in November 2014. He serves on the Senate Finance, Banking, Budget, and Rules Committees as well as the Select Committee on Intelligence, where he is the Vice Chairman. During his time in the Senate, Senator Warner has established himself as a bipartisan leader who has worked with Republicans and Democrats alike to cut red tape, increase government performance and accountability, and promote private sector innovation and job creation. Senator Warner has been recognized as a national leader in fighting for our military men and women and veterans and is working to find bipartisan, balanced solutions to address our country’s debt and deficit.

From 2002 to 2006, he served as Governor of Virginia.  When he left office in 2006, Virginia was ranked as the best state for business, the best-managed state, and the best state in which to receive a public education.

The first in his family to graduate from college, Mark Warner spent 20 years as a successful technology and business leader in Virginia before entering public office.

Join us on March 8th at Eastern Foundry in Rosslyn for professional networking, coffee and pastries, a great conversation, and Q&A. Get your tickets today!

Notes from the Venue:

We encourage visitors to use the Metro, our stop is Rosslyn and to get to our building, it’s a short downhill, less than 2-blocks walk. Once you enter the building, go up the escalators to get on elevators on the left behind the large security desk.
The right-hand elevators so down to the parking garage. We are unfortunately not able to offer parking validation for guests.
But for those who would still like to utilize the garage, the rates can be found here.